Who would have thought that the large plastic water tanks that you see dotting the New Zealand rural landscape can be given a new life? Well, they can.

In fact, Bailey’s Tanks commitment to sustainability is at the heart of everything they do. You could say it all starts in the factory and ends on the farm, but in fact it doesn’t stop there.

Talking to Bailey Tanks CEO David Bailey, he explains that “after nearly 50 years in business, there are some tanks out there that have probably had a bit of a rough time and starting to get a bit long in the tooth, particularly with our harsh NZ UV”.

Bailey Tanks are coming up to fifty years in business, which is very impressive by NZ standards.  They felt that now is a good time to start informing people about their recycling journey.

Bailey says, “No longer is it enough to say your product is recyclable, that was sustainability in the 90’s, it’s now time for manufacturers to be responsible for the reclaiming and recycling of their own products”. This hasn’t been easy for Bailey’s as their products are big and bulky and often installed in remote areas. “When we looked at the feasibility of the project we had to ensure that we didn’t burn extra carbon in reclaiming our tanks. By backloading our tank delivery trucks we have managed to keep the extra freight emissions to a minimum”.

For farmers the Bailey recycling journey starts when a tank has reached its ‘end of life’, remember they have been servicing the rural sector for almost half a century, a Bailey truck will come out to the farm and pick up the old tank. All the tank owner has to do is cut the old tank into 1-meter squares.

They call it cut up – call up and collect – it’s that easy.

Back at the Bailey factory the 1-meter squares are granulated into smaller pieces where they are melted and additives are mixed inside an extruder to give the plastic UV resistance. The recycled plastic is then cut into 4mm balls via an underwater palletizing process, dried, cooled and then finally ground into a powder ready to mould into a new product.

So, if you have a plastic water tank at the end of its life call Bailey’s on 0800 BAILEY.

Now that’s a company with a commitment to a more sustainable future. 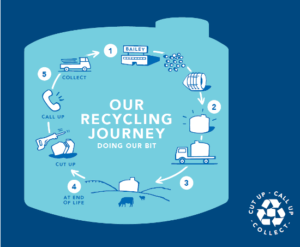